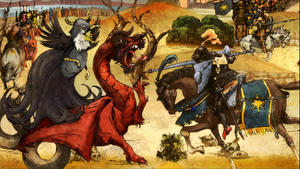 Set in a Medieval fantasy world, a war known as the Southern Kingdoms War has been raging between the humans and demons for 15 years. The human's greatest warrior, known as the Hero, confronts the leader of the Demons, the Demon King, because he hopes it will end the war.

To his surprise the Demon King is a woman. She explains the war between their people is not a war between good and evil and ending it now will only bring further chaos. Convinced, both the Hero and Demon King work together to end the war another way that will benefit both sides.

Fifteen years have passed since the start of the war. A small band of warriors have set out to defeat the Demon King, but when the Hero, all alone reaches his target, gets more than what he expected. The Demon King’s plan is met with heavy resistance from uneducated humans. The Hero gets to witness and the darker side of the Head Maid and questions the validity of the grand plan.